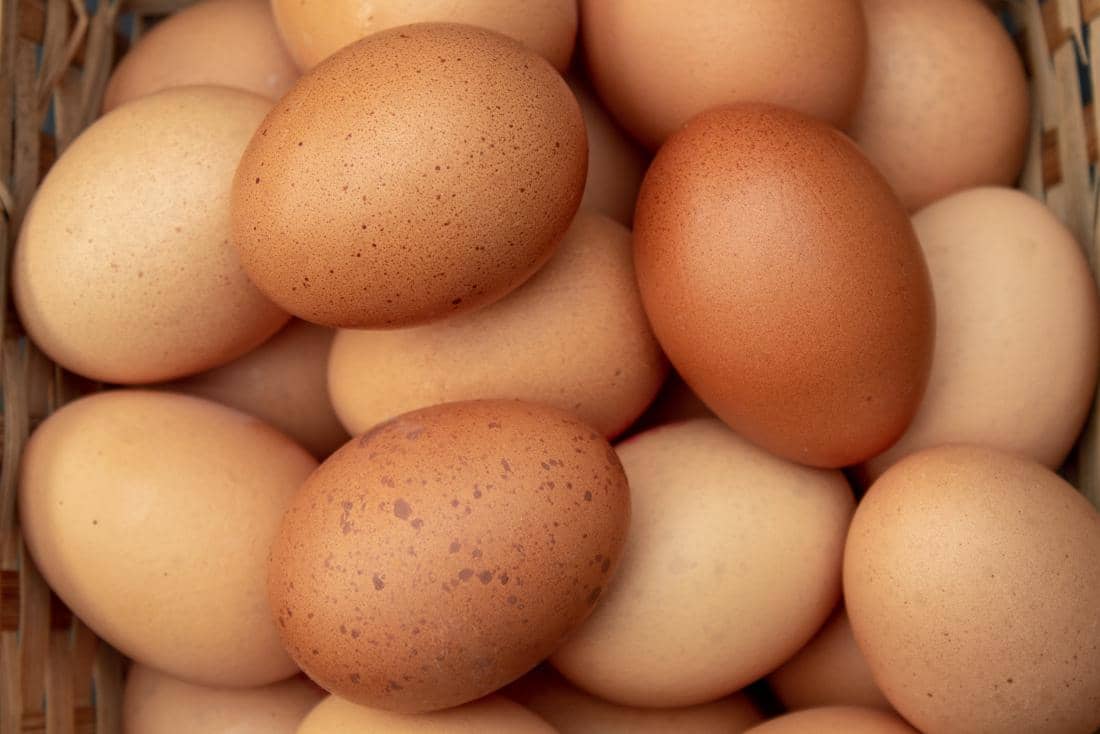 Do Chickens Lay Eggs From Their Bum?

It might seem like a simple question, but where do chickens lay their eggs from and do they come from their bum? We take a deep dive into a chicken’s anatomy!

What came first, the chicken or the egg? This is the question that has came across everyone’s mind at some point.

But you’ve probably also wondered where eggs come from and how chickens lay them, how does this relatively unassuming and domesticated bird produce the delectable white shelled food we love and consume in the millions.

While the process is pretty much the same in all birds, chickens are unique because we have selectively bred them over thousands of years to produce up to 300 eggs per year, laying nearly all-year round.

How Did We Get Chickens To Lay So Many Eggs?

Natural evolution did not create a chicken that lays up to 300 unfertilized eggs per year. Human engineering or selective breeding created such chickens.

The evolutionary principles of survival of the fittest and inheritance of genetic traits still apply with selective breeding, but humans determine who is the fittest and not an natural environmental pressure.

This means that over the past few thousand years, us humans have only chosen to breed the chickens that produced the most eggs. As a result, this meant that with each generation the chickens would be more likely to produce eggs.

Looking for the perfect first chickens for your back garden? Take a look at our article on the Rhode Island Reds, ideal for beginners!

Do Chickens Lay Eggs From Their Bum?

A young female chicken starts life with two ovaries, but the right ovary remains undeveloped and only the left one becomes fully functional. The functioning ovary contains all the undeveloped yolks.

When a chicken reaches laying age, one by one the yolks mature. Approximately every 25 hours, one yolk is mature enough to be released into the funnel of the oviduct, a process called ovulation, which usually occurs within an hour after the previous egg was laid.

If ovulation occurs too rapidly, or if one yolk for some reason moves too slowly through the oviduct and is joined by the next yolk, the pullet will lay an egg with two yolks, otherwise known as a double yolker.

As the yolk travels through the oviduct of the chicken it gets encased within layers of egg white, wrapped further in protective membranes and sealed within it’s shell.

Once the egg has gone through all of this, the shell gland at the bottom end of the oviduct pushes the egg into the cloaca, a chamber from which a chicken poops and produces eggs, but not at the same time – don’t worry.

So, yes, technically a chicken egg does come from it’s bum. But a chicken’s bum is called a ‘cloaca’ and it is used for both eggs and excretion.

How Does An Egg Turn Into A Chick?

So now you might be wondering how an egg ever turns into a baby chick, luckily we know that secret too so we’ll let you in on it.

As the yolk travels through the oviduct, the journey is slightly different in that if their is sperm present from a male chicken, this is the point that the yolk will be fertilised.

Then the egg is formed around the yolk like previously described. However, there will now (hopefully) be a small embryo developing inside it. Special temporary organs or embryonic membranes are formed within the egg, both to protect the embryo and to provide for its nutrition, respiration, and excretion.

Several changes take place during the 18th and 21st days. The chick draws what remains of the yolk into its body and “takes its lunch with it” when it hatches. Thus, the chick really doesn’t need to be fed for the few days after it hatches.

Processing…
Success! You're on the list.
Whoops! There was an error and we couldn't process your subscription. Please reload the page and try again.

This website uses cookies to improve your experience while you navigate through the website. Out of these, the cookies that are categorized as necessary are stored on your browser as they are essential for the working of basic functionalities of the website. We also use third-party cookies that help us analyze and understand how you use this website. These cookies will be stored in your browser only with your consent. You also have the option to opt-out of these cookies. But opting out of some of these cookies may affect your browsing experience.
Necessary Always Enabled
Necessary cookies are absolutely essential for the website to function properly. These cookies ensure basic functionalities and security features of the website, anonymously.
Functional
Functional cookies help to perform certain functionalities like sharing the content of the website on social media platforms, collect feedbacks, and other third-party features.
Performance
Performance cookies are used to understand and analyze the key performance indexes of the website which helps in delivering a better user experience for the visitors.
Analytics
Analytical cookies are used to understand how visitors interact with the website. These cookies help provide information on metrics the number of visitors, bounce rate, traffic source, etc.
Advertisement
Advertisement cookies are used to provide visitors with relevant ads and marketing campaigns. These cookies track visitors across websites and collect information to provide customized ads.
Others
Other uncategorized cookies are those that are being analyzed and have not been classified into a category as yet.
SAVE & ACCEPT
%d bloggers like this: